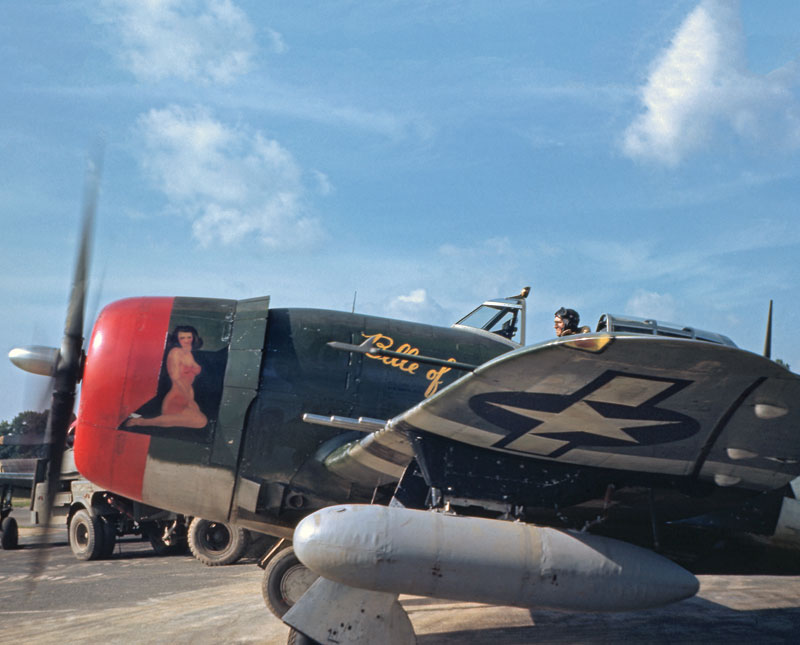 As the long-lived Thunderbolt group in the ETO, the 56th FG certainly sported some of the most varied camouflage plus squadron and individual markings in England. Upon arrival at Kings Cliffe in January 1943, its first combat-ready P-47C models bore a factory-standard olive drab over neutral gray livery.

As the Thunderbolt was the first and only radial-engined U.S. fighter in the ETO at the time, its similarity to an Fw 190 quickly forced visual augmentation with 24-inch white nose cowl bands and later matching bands on the horizontal and vertical tails. A further enhancement was a second star cockade added to the left side underwing and a short-lived red surround to the fuselage star.

RAF-style group/squadron 3-letter codes were soon added as new U.S. units arrived in theater. Markings remained pretty uniform until early 1944 when group theater nose bands were replaced with squadron colors of red, yellow, and blue, and later partly applied to the rudders of two squadrons. Theater bands were also generally removed but when the initial uncamouflaged replacement P-47D-21s and -25s began arriving in the late spring of 1944, the group immediately began painting many of its new charges in several different and unique patterns. As pictured here, the Belle of Belmont, a P-47D-22 from the 63rd Fighter Squadron was “restored” to a standard OD-over-gray scheme while many of the D-25 bubble-tops were given an RAF-style shadow-shading green/gray upper pattern. Red nose cowlings were then adopted throughout the group to enhance their identity.

Invasion striping came next and that was soon over-painted topside but extra-large star and bar insignia were added when low-level strafing was added to the group’s mission. When the late model natural-metal M models were introduced early in January 1945, each squadron came up with its own distinctive appearance that included matte black upper-surfaces with red codes, a gray-green disruptive pattern with yellow lettering, and a rather flamboyant shadow-shading scheme in indigo and sky blue with the squadron codes left in natural metal. True to its earned uniqueness, the 56th FG maintained its distinctive legacy through its pilots, personnel, and its visual appearance.  J