Two X-29 aircraft, featuring one of the more unusual designs in aviation history, were flown at NASA Ames-Dryden Flight Research Facility (now Armstrong Flight Research Center) at Edwards Air Force Base, California. The demonstrators investigated advanced concepts and technologies during a multi-phased program conducted from 1984 to 1992. The program provided an engineering database that is available for the design and development of future aircraft.

The aircraft’s forward-swept wings were mounted well back on the fuselage, while its canards (horizontal stabilizers to control pitch) were in front of the wings instead of on the tail. The complex geometries of the wings and canards combined to provide exceptional maneuverability, supersonic performance and a light structure. Air moving over the forward-swept wings tended to flow inward toward the root of the wing instead of outward toward the wing tip as occurs on an aft-swept wing. This reverse airflow kept the wing tips and their ailerons from stalling at high angles of attack (direction of the fuselage relative to the air flow). 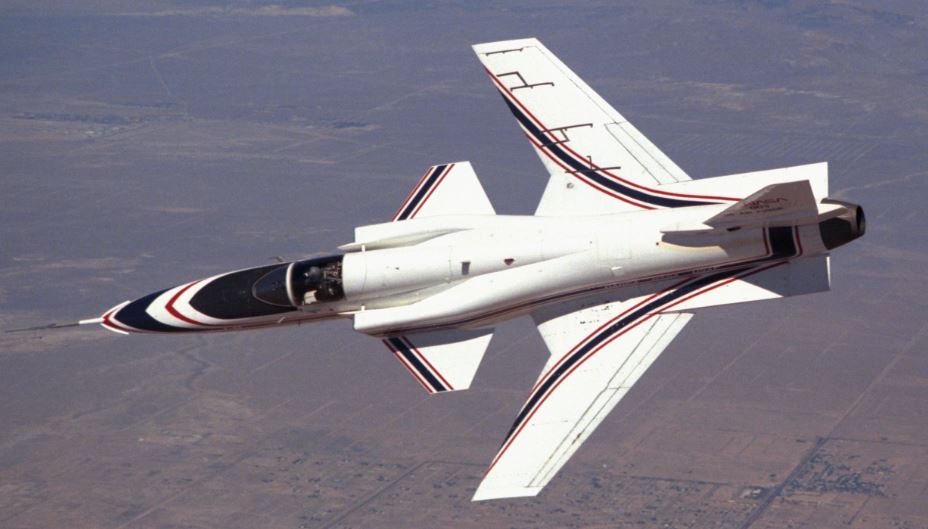 Research results showed that the configuration of forward-swept wings, coupled with movable canards, gave pilots excellent control response at up to 45 degrees angle of attack, higher than comparable fighter aircraft. During its flight history, X-29s were flown on 422 research missions. Aircraft No. 1 flew 242 in the Phase 1 portion of the program; 120 flights were flown by aircraft No. 2 in Phase 2; and 60 flights were completed in a follow-on “vortex control” phase.

Before World War II, some gliders with forward-swept wings existed, and the NACA (the National Advisory Committee for Aeronautics) Langley Memorial Aeronautical Laboratory (now Langley Research Center) in Hampton, Virginia, performed wind-tunnel studies on the concept in 1931. Germany developed a jet-powered aircraft with forward-swept wings, the Junkers Ju 287, during the war. The concept, however, was not successful because the technology and materials did not exist to construct the wing rigid enough to overcome bending and twisting forces without making the aircraft too heavy. Hamburger Flugzuebau designed and built the Hansa Jet HFB-320 in the early 1960s; the aircraft first flew in 1964. The company built 45 HFB-320s, the only certified civilian business jet to use a forward-swept-wing.

The introduction of composite materials in the 1970s opened a new field of aircraft construction, making it possible to design rugged airframes and structures stronger than those made of conventional materials, yet lightweight and able to withstand tremendous aerodynamic forces.

The X-29’s thin supercritical wing was of composite construction. State-of-the-art composites permit aeroelastic tailoring, which allows the wing some bending but limits twisting and eliminates structural divergence within the flight envelope (deformation of the wing or breaking off in flight).

The Grumman Corporation was chosen in December 1981 to receive an $87 million contract to build two X-29 aircraft. They were to become the first new X-series aircraft in more than a decade. First flight of the No. 1 X-29 was Dec. 14, 1984, while the No. 2 aircraft first flew on May 23, 1989. Both first flights were from NASA Ames-Dryden Flight Research Facility.

The flight control surfaces on the X-29 were the forward-mounted canards, which shared the lifting load with the wings and provided primary pitch control. The wing flaperons (combination flaps and ailerons) were used to change wing camber and function as ailerons for roll control when used asymmetrically. In addition, the strake flaps on each side of the rudder augmented the canards with pitch control. The control surfaces were linked electronically to a triple-redundant digital fly-by-wire flight control system that provided an artificial stability.

The particular forward-swept wing, close-coupled canard design used on the X-29 was highly unstable. The X-29 flight control system compensated for this instability by sensing flight conditions such as attitude and speed and through computer processing, continually adjusted the control surfaces with up to 40 commands each second. Conventionally configured aircraft achieved stability by balancing lift loads on the wing with opposing downward loads on the tail at the cost of drag. The X-29 avoided this drag penalty through its relaxed static stability.