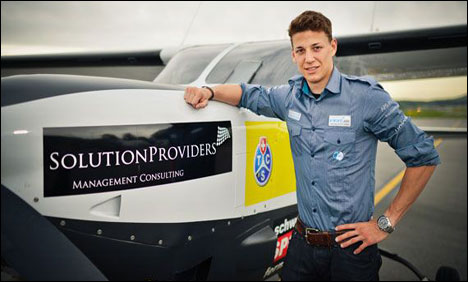 KARACHI: A dashing 22-year-old Swiss pilot passed through Karachi on his way to making a world record of being the youngest pilot to fly round the globe in 80 days.

Carlo Schmid flew in to Karachi from Muscat on way to Ahmedabad and Nagpur. He has undertaken RTW 2012 (Round the World) to pay tribute to his mother Carla Schmid who died of cancer in August 2010.

He founded a private limited company, to collect donations for a Children Project run under UNICEF.

RTW-2012 is executed by a generation of youngsters.

He quit banking in 2011 to concentrate on RTW 2012 and on July 11, 2012 took off from Switzerland in his Cessna 210 turbine single-engine plane to fly around the world, covering 40,000 kilometers, crossing 24 countries in Europe, Africa, Asia, North America.

He said if he manages to achieve objective, it will be great honor for him and memory of his late mother to be youngest pilot to fly around the world.