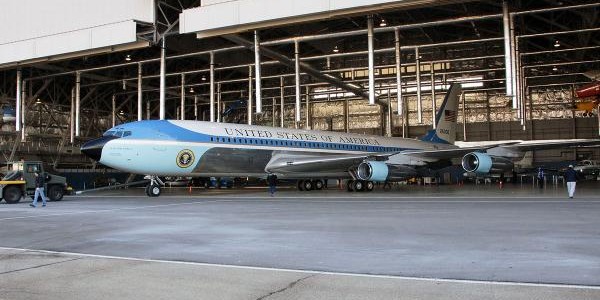 Snow and a biting windchill didn’t deter Sidney C. Palomino and her 5-year-old son, Mauricio, from standing at the edge of a rope line Saturday to see one of the most famous planes in history emerge out of a Wright-Patterson Air Force Base hangar on an Ohio morning more like January than April.

She and her son were one of a handful of bystanders who got out of a row of cars and SUVs to face winter-like icy windchill while handlers towed a blue-and-white Boeing 707, best known as the Air Force One jet called SAM 26000, to a new $40.8 million home at the National Museum of the U.S. Air Force.

“This doesn’t happen every day,” she said. “This is history. It’s amazing and I definitely want my kids to see it and participate in it and be this close. It’s a once-in-a lifetime thing and I’m excited they get to be here even though it’s cold.”

For the complete story by Barrie Barber of The Dayton (Ohio) Daily News via Military.com, click here.