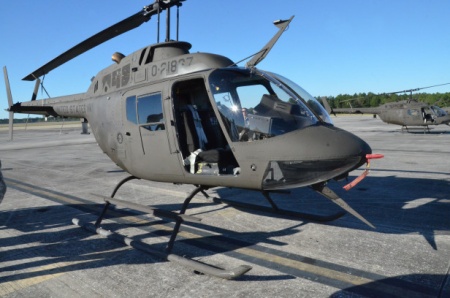 One of the U.S. Army’s oldest and most reliable helicopters is leaving the Florida National Guard.

For more than four decades, the Bell OH-58 Kiowa reconnaissance helicopters buzzed through the skies over Florida, but due to National Guard divestiture of the airframe it will see its final flight as a military aircraft on Oct. 31.

Thanks to the diligence of Florida Army National Guard aviators, the agile, single-engine helicopters will have new lives – however – as civilian law-enforcement aircraft. Three of the remaining Florida National Guard Kiowas based in Jacksonville are being transferred to different Florida sheriffs’ offices to augment their aviation programs.

Chief Warrant Officer Sean Hogan – an instructor pilot and maintenance test pilot with the Florida Army National Guard’s B Company, 2-151st Security and Support Aviation Battalion – explained that the Kiowas were scheduled to be either destroyed or possibly sent to a gunnery range for target practice. He said his crews at the aviation battalion couldn’t stand to see their well-maintained helicopters destroyed, so they campaigned to have three of their Kiowas transferred to the law enforcement agencies in Alachua, Martin and St. Johns counties.

“Not only are all three aircraft going to stay here in the state and fly for local sheriff’s departments, but Florida Guard aviators are going to continue to fly them,” Hogan said, noting that each sheriff’s office has an aviator who also flies helicopters part-time for the Florida Army National Guard.

“They are 100 percent mission-capable and in fantastic shape,” Hogan explained, pointing out fresh paint jobs on the helicopters that he been flying for 20 years.

On Oct. 16 a three-person team from the Alachua County Joint Aviation unit – a combination of personnel from the Gainesville Police Department and Alachua County Sheriff’s Office – picked up Kiowa No. 867 from the Florida National Guard’s Army Aviation facility at Cecil Commerce Center in Jacksonville. According to Chief Pilot Richard Bray of the Alachua County Sheriff’s Office, his unit has been flying Kiowas since the mid-90s. They use the retired military helicopters to support their other aircraft during patrol operations.

“[The Kiowas] have been great aircraft for us and for any of the other agencies that are using them,” Bray said. He noted that Alachua County Deputy Sheriff and pilot Brett Rhodenizer previously served as commander of the Florida National Guard Kiowa unit and is quite familiar with the aircraft.

Before Bray flew 867 away from Cecil Commerce Center, he said that his office plans to install additional police equipment in the Kiowa and they expect to have it operational by the end of November.

“Within 30 days it will be protecting the citizens of Alachua County,” Bray said.

When 867 lifted off into the morning sun and away from the National Guard facility, Hogan and his team watched as 42 years of Florida Army aviation history drifted into the distant haze.

The OH-58 Kiowa was used in different forms by the U.S. Army since the late 1960s, primarily for observation and reconnaissance. The Florida Army National Guard received the helicopters in 1972, using them as scouts for its attack helicopter battalion. Later the Kiowas were assigned to the Reconnaissance and Aerial Interdiction Detachment (RAID) teams, flying in support of the Florida National Guard’s Counterdrug program. In more recent years the helicopters flew in support of disaster relief operations – including after Hurricane Katrina – and along the U.S.-Mexico border for National Guard border patrol missions.

“This airframe is the Bell 206 airframe,” Hogan said. “It is the most prolific helicopter airframe on the planet. They still make parts for it … these helicopters probably have the ability to fly for another 40 years.”

Hogan estimated about half of the 4,000 hours of flight time he completed during his career was in the OH-58 Kiowa. In the Kiowa he has flown from Florida to Connecticut, from the Atlantic Coast to the Pacific Coast, and even over the famed Mariana Trench in the western Pacific – the deepest ocean trench on earth.

He also estimated that the Florida Army National Guard has netted about 50,000 accident-free flying hours in the Kiowas over the past 40 years.

“They are that reliable and I love flying it,” he said. “It is a real pilot’s aircraft.”

Sgt. 1st Class Todd Bridges, who has been an OH-58 mechanic since 1988, agreed that the helicopter was one of the most reliable pieces of equipment in the Florida Army National Guard arsenal.

“I have total confidence in the aircraft,” Bridges said, pointing to one of the OH-58 Kiowas left in the hangar at Cecil Commerce Center. “I’ve had a lot of people let me down, but I’ve never had this thing here fail me.”

Bridges was also an aerial observer on the helicopters until 1996, and fondly remembers flying level with the treetops during training in the early 1990s. He said he feels that the helicopters will continue to provide invaluable support to Florida during their continued lifespan with civilian law enforcement.

A fourth Florida Army National Guard OH-58 Kiowa helicopter will be placed on static display outside the Army Aviation facility at Cecil Commerce Center, and the 2-151st Security and Support Aviation Battalion is planning an official retirement ceremony for the aircraft on Oct. 31.