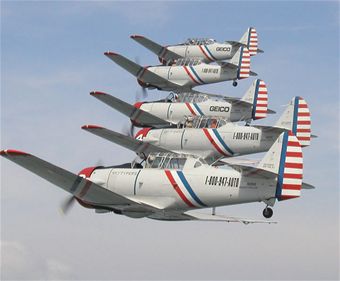 A host of vintage aircraft and one modern fighter jet will take to the skies today in the first Atlantic City Airshow without a single military act. Organizers searched farther than ever to find enough acts to round out a lineup that took a hit, along with the rest of the country’s airshows, when federal budget cuts grounded nonessential military flying.

Greater Atlantic City Chamber President Joe Kelly has said that while the situation was challenging, organizers were determined to not cancel the 11th annual show and instead provide a new experience for spectators on Atlantic City’s beaches and Boardwalk.

Today spectators will see a show laden with vintage planes such as the six World War II North American T-6 Texans used by the Geico Skytypers, who will serve as the show’s finale. New to the lineup are the Firebirds Xtreme Aerobatic Team and the 4CE, a formation aerobatic team kicking off the show.

For the complete story by Jennifer Bogdan of The Press of Atlantic City, click here.