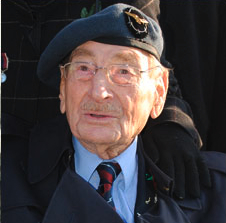 The oldest surviving and longest-serving British prisoner of war died Thursday at the age of 98. Alfie Fripp was held in 12 different prisoner-of-war camps during World War II after his plane was shot down by the Germans in only the second month of the war.

He died in a Bournemouth, England, hospital with his family by his side.

The last of the “39ers,” the unfortunate few taken prisoner in the first year of the conflict, Alfie spent part of the war in the infamous Stalag Luft III, site of “The Great Escape” of 70 Allied prisoners later immortalized on film. He was an observer on a Bristol Blenheim light bomber during a reconnaissance mission when it was shot down on Oct. 13, 1939.

For the complete story by Charlie Cooper of The (London) Independent, click here.