30 April 1962: Though it had been airborne briefly just a few days earlier, “Article 121”, the first Lockheed A-12, serial number 60-6924, took off from a Top Secret facility at Groom Lake, Nevada, on its “official” first flight. Lockheed test pilot Louis Wellington (“Lou”) Schalk, Jr. was in the cockpit. 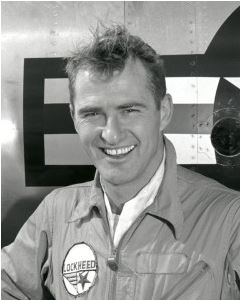 During the 59-minute test flight, Schalk kept the airspeed to just 340 knots (391 miles per hour, 630 kilometers per hour), but climbed to 30,000 feet (9.144 meters) while he tested systems and handling characteristics. He described the airplane as very stable and extremely responsive.

The A-12 was a top secret reconnaissance airplane built for the Central Intelligence Agency under the code name “Oxcart.” It was the replacement for the Agency’s high-flying but subsonic U-2 spy plane which had become vulnerable to radar-guided surface-to-air missiles. (A U-2 piloted by Francis Gary Powers had been shot down with an SA-2 Guideline missile while over Russia exactly one year before.)

The A-12 could fly faster than Mach 3 and higher than 80,000 feet—so fast and so high that no missile could reach it. By the time missile site radar locked on to an A-12 and prepared a missile to fire, the Oxcart had already flown beyond the missile’s range.