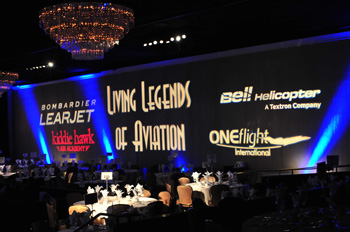 Many of aviation’s best-known names will be attending the 10th Annual Living Legends of Aviation Awards, presented by Bell Helicopter and Embry-Riddle Aeronautical University, later this month in California. The event, set for Jan. 18 at the Beverly Hilton, will be hosted by John Travolta and will celebrate a decade of recognition during aviation’s second hundred years.

The program starts with Morgan Freeman narrating a tribute to four Legends that took their last flight West in 2012 – Neil Armstrong, Carroll Shelby, George McGovern and AL Ueltschi, followed by the inductions of new Living Legends of Aviation.

Harrison Ford will present the Harrison Ford Aviation Legacy Award to Greg Anderson, founder of the Experimental Aircraft Association’s Young Eagles and CEO of Wings Over the Rockies.

James Albaugh will be inducted into the Living Legends of Aviation and will receive the Lifetime Aviation Industry Leader Award for his remarkable contributions and career at Boeing Aircraft Co. Inductees include Eren and Fatih Ozmen, the dynamic leaders of Sierra Nevada Corp., who have taken their company from 20 to 2,100 employees. Additionally, the Ozmen’s will present this year’s Aviation Industry Entrepreneur of the Year Award to John Uzcekaj, CEO of Aspen Avionics.

David Neeleman will be honored with the Lifetime Aviation Entrepreneur Award. A true entrepreneur, Neeleman, founded Jet Blue Airlines in 1998, and Azul Airlines in 2008, revolutionizing travel for millions of people in both North and South America.

Actor, producer and aerobatic pilot David Ellison will be presented with the 2013 Aviation Inspiration and Patriotism Award.

In attendance will be Legend Sully Sullenberger and new inductees, including the legendary test pilot Randy Gaston. Bob Hoover will present his Freedom of Flight Award to the first and the last man to walk on the moon. Accepting are Carol Armstrong and Gene Cernan. Join more than 50 Living Legends of Aviation including many celebrity Legends, and be part of the most important and prestigious recognition event in aviation.